Chris Allan cycles across the French Alps for local charities Day 8 update - Today is the last day of the challenge.  The leisurely 46 mile ride from the hotel to the airport took Chris 2½ hours, where he met up with the rest of the riders.  They dismantled and packed their bikes into the van, ready for the 950 mile drive back to the UK.  Chris summed up the trip: “What an experience it has been … very tough, emotional, challenging on mind and body, boggling ascents and mind blowing descents.  Wind, rain, snow and glorious sunshine. Ankles and knees are very sore, but it has been worth it.”

Day 7 update - A less demanding day scheduled today (62 miles distance and 4639ft of climbing) after the massive effort of yesterday.  It’s another sunny one and currently 28°C.  Chris’s comment this morning “my ankles are really sore, so glad today is relatively straight forward”.

Day 6 update - One of the most challenging days of the whole trip today with the huge task of cycling 19km (12 miles) up Mont Veneoux, with an average incline of 7.2%.  This is one of the largest mountains in the region dominating the landscape at a height of 1,912m. It has featured 14 times in the Tour de France and some say Mont Ventoux is the hardest of all the Tour de France climbs and rightly so.  Mont Ventoux is probably most famous among cycling fans as the place where British world cycling champion Tom Simpson died in 1967 while competing in the Tour de France. There is a monument to Tom Simpson towards the top of the mountain which is usually covered with flowers and other cycling memorabilia. 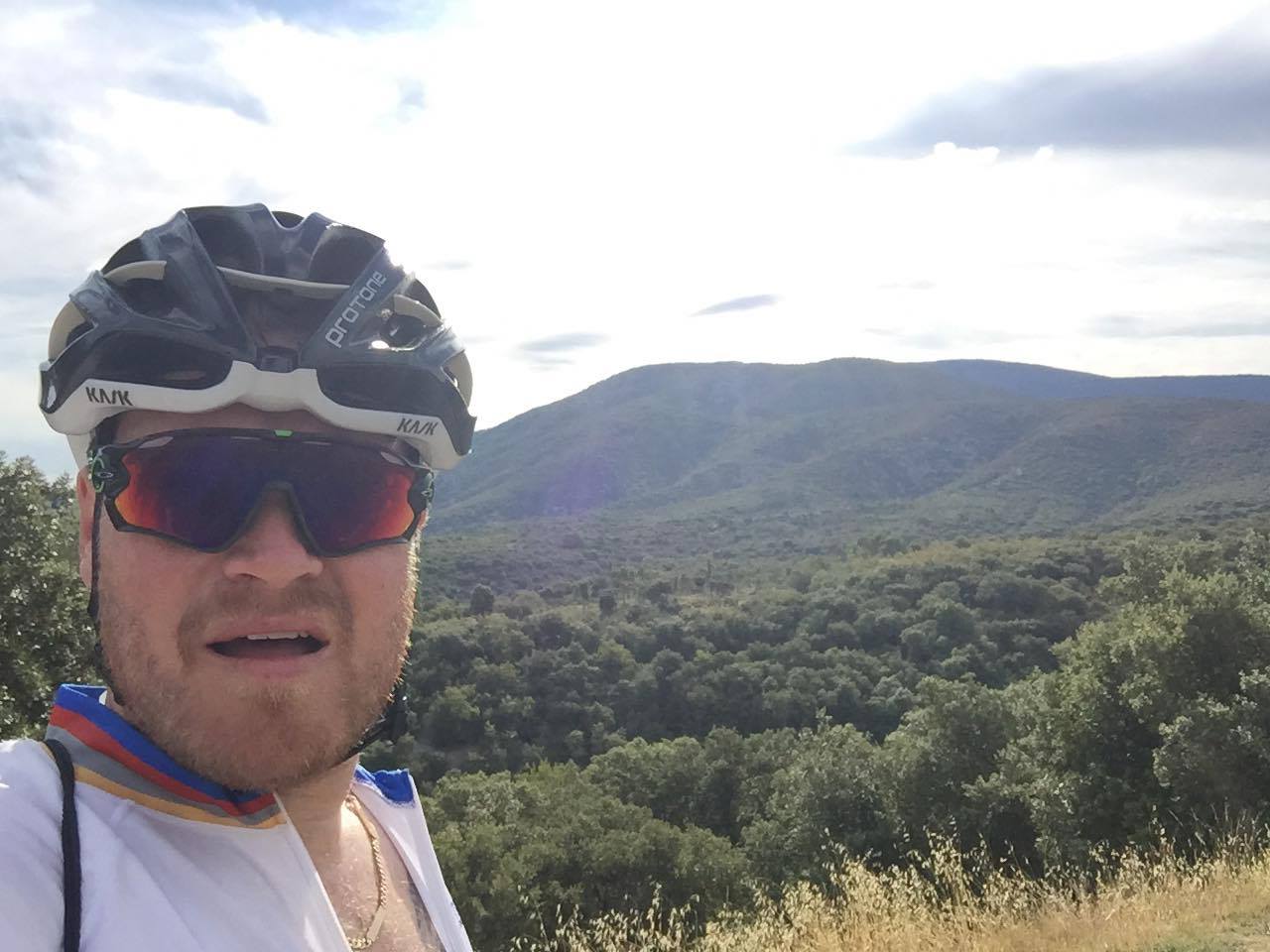 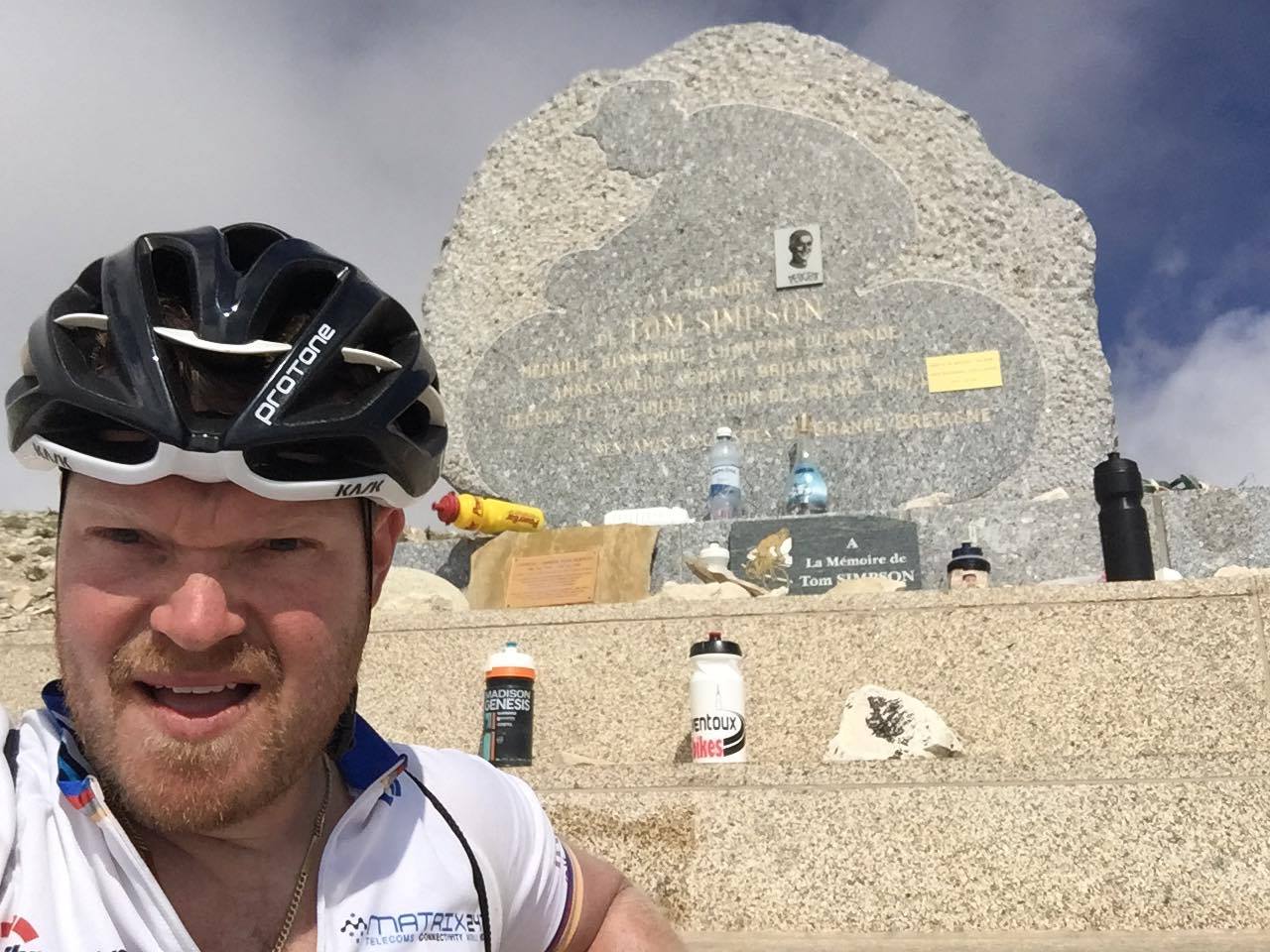 (Left) Chris with Mont Veneoux in the background.  (Right) Chris in front of the Tom Simpson memorial.

Day 5 update - An even hotter day with temperatures around 33°C made cycling tough.  Added to that, the cafe the riders had planned to stop at for lunch was closed, so they had to push on.  After 82 miles Chris was hungry, thirsty and exhausted so he found the nearest village and a patisserie to restore his energy levels.  Chris's knees and ankles are starting to feel the strain.

Day 4 update - A hot day made it challenging to stay hydrated.  Chris was having to fill his water bottles up from fountains, streams and waterfalls along the route.  50 miles into the 75 mile ride the group came to a tunnel through the mountain that had collapsed, so they had to divert using an alternative route. 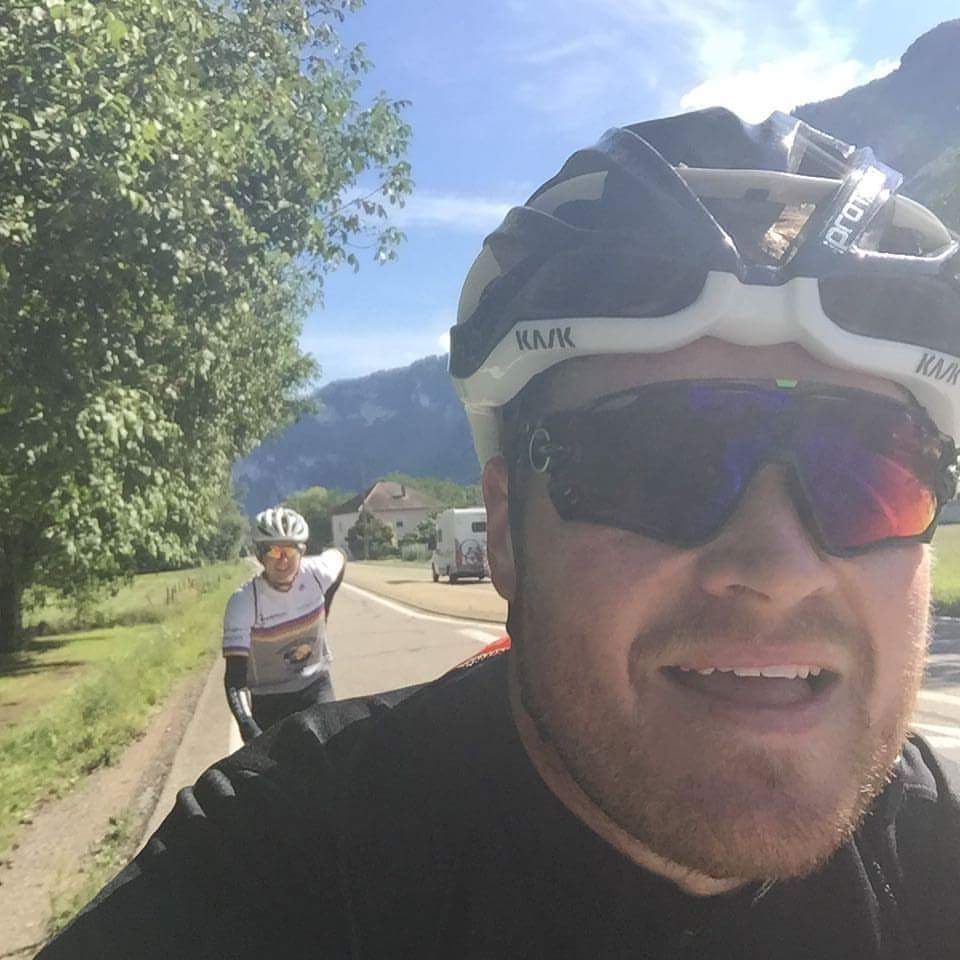 Day 3 update - A much warmer and sunnier day today which made cycling conditions more pleasant. Although his legs were stiff from the previous day, Chris managed to cover 50 miles in 2 hours 36 mins, which he was very happy with.  In total Chris cycled 78 miles on Day 3 with 6,952ft of climbing.  He opted to do the regular route rather than the extended route (93 miles and 10,696ft climbing) to save wear and tear on his knee.

Day 2 update - The weather was not kind with heavy downpours soaking the riders to the skin. The wind chill factor on the descents made it difficult to stay warm. In Chris’s words: “This was the toughest ride I’ve ever done, full of emotions both highs and lows. Coming down from Col de Madelaine it was 4°C and I was so cold and wet I was struggling. Couldn’t feel my hands or feet. My teeth were chattering uncontrollably, as were my arms. Struggled to control my bike, so decided to get off the mountain [taking the shortest route] and warm up”.  Five riders did not manage to complete the ride and had to be picked up by the support vehicle.

Chris’s left knee is starting to get sore and he is not sure how it will hold up in the days to come. He has decided to focus on completing the regular route rather than tackling the extended route as planned which is an additional 77 miles and 13,281ft climbing.  Chris added:  “Today was absolutely brutal, this is proving to be far more challenging than anticipated!” 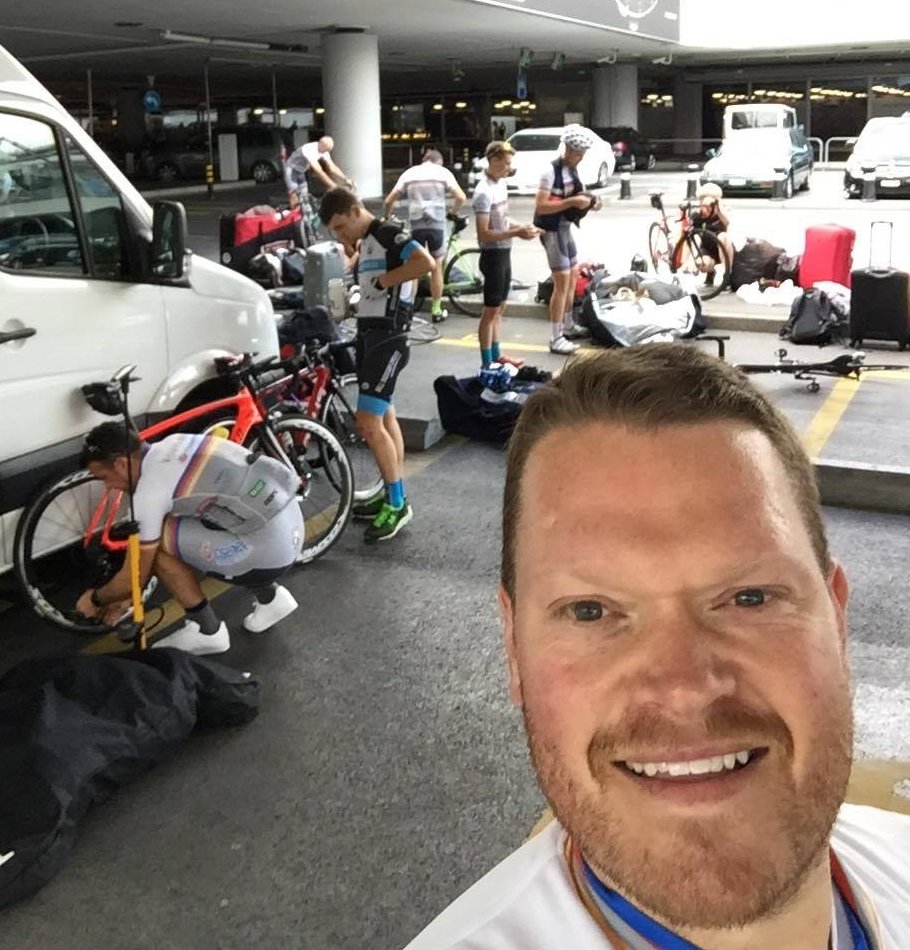 Day 1 update - Chris has arrived at Geneva airport, assembled his bike and is now cycling 60 miles (3629ft of climbing) to the first hotel/stopover.

This impressive challenge will take place from 1st - 8th September and will see Chris pedal his way over 580 miles of mountain passes from Geneva to Nimes.

As part of his fundraising efforts, he’ll be aiming to raise £1000 for each of his charities. He’s also obtained support from his colleagues here at PPE, who have made donations to both.

“As a relatively keen cyclist and having done some challenging rides previously for charity, I saw this challenge ride as a once in a lifetime opportunity to really push myself towards a goal and at the same time raise funds for two local and very worthy causes."

“Both of these charities are heavily reliant on donations in order for them to exist and drive forward in the work that they do.” says Chris.

The French Alps Cycle Challenge will include climbs up various mountains including Mont Ventoux, known as the Giant of Provence and down 21 hairpin bends that ascend the summit of Alpe D’Huez. Chris will be cycling to a total altitude of 75,800ft – the equivalent of 77 Eiffel Towers, or twice the operating height of commercial aircraft! When asked how he feels about the upcoming event, Chris said: “I was feeling fine up until the end of July. It then hit me that in one month’s time I will be undertaking, quite probably, the biggest challenge of my life. My biggest concern, apart from the distance and elevation, is how my body will cope. It is very difficult to train for a challenge like this as you cannot replicate the type of riding. All you can do is concentrate on your fitness.”

In 2012 Chris completed a cycle of the entire length from Leeds-Liverpool Canal, covering 124 miles. The same day that the Olympic Torch for the London 2012 Olympics was diverted due to the rain. In preparation for the French Alps, Chris cycled from Morecambe to Bridlington along a route known as ‘The Way of the Roses’, covering 172 miles in 1 day earlier this year.

You can sponsor Chris and help him towards his £2000 aim for both charities, via Chris’s Virgin Money Giving page: uk.virginmoneygiving.com/csallan

More about the charities

Rosemere Cancer Foundation is celebrating their 20th anniversary this year. Over the last two decades they’ve helped to keep essential equipment in local Lancashire and South Cumbria hospitals.
Their aim is to raise £1.25m to ensure that the latest generation surgical robotic system, the DaVinci Xi Robotic Surgical System, stays in the local area to continue to benefit cancer patients in the local area.

“By developing a robotic surgical cancer service, the Rosemere Cancer Centre will be at the forefront of cancer surgery throughout the whole of the North of England. Robotic surgery offers patients less invasive surgery, faster recovery times and better outcomes. We will be able to attract the best cancer surgeons and continue to offer world class cancer treatment locally.” Pierre Martin-Hirsch – Consultant Gynaecological Oncologist Lancashire Teaching Hospitals NHS Trust

Blackburn Youth Zone is a charity aiming to inspire, build confidence and ambition and raise hope in young people of all backgrounds, ethnicities, race, cultures and abilities. The charity aims to change prospects offered to young people in the local area by offering them somewhere to go and something to do whilst educating and informing them on the benefits of being healthy and getting active. The money Chris raises will go towards a wider council initiative in the ‘Eat Well, Shape Up and Move More’ Public Health strategy.